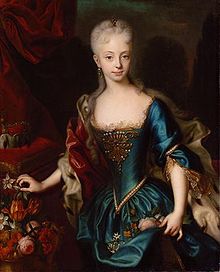 Maria Theresa before her 16 births.

My kingdom for an HEIR! A male heir, that is.  The cry was heard throughout the world, issued by wives and their protectors.  For until the 20th century confirmed that the sperm donors, not the incubators, determined the sex of a child, women took the rap.

Remember Anne Boleyn?  The chopping block stood more than ready when a queen failed to give birth to a thriving male child.

In my own case, my mother-in-law, the Archduchess, stood beside my bed with each of my childbirths, ready to praise or condemn me depending on what the new baby bore between its legs.  My first baby was a girl.  My second baby: also a girl.  And then, praise the Lord, my Rudolf entered the world, and all was well.  For a while.

My dear Mummi, when it came to issue, she was a champion.  She had ten babies.  Ten!  Can you imagine?  In the days when hot water and a brass bedrail was all a laboring damsel had for her trouble.  No epidural. No Demerol.  No–oh, what do they call it, twilight sleep?  And that paragon Maria Theresa, she was a brood mare to outdo all.  She gave birth to sixteen children.  And they all lived!  Tough act to follow for any Austrian monarch, don’t you agree? 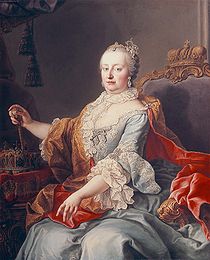 Maria Theresa after expelling her brood.

After Rudolf, I had my very favorite child (conceived during one of my make-up sex encounters with the Emperor–those are always special, are they not?)

One hopes that this “male issue” pressure has subsided permanently.  I mean, look at the three most recent US Presidents.  They beget girls only! Girls!  Thank the Lord that women, queens, first ladies and the like no longer face the opprobrium dished out by the guillotine for giving birth to baby girls.  Well, legally, anyway!

I write young adult contemporary/historical mash-up novels. My novel, THE MOMENT BEFORE debuted from Diversion Books in January, 2014, followed by THE EMPRESS CHRONICLES, Sept. 2014, and the sequel THE KEEPSAKE, fall, 2015.